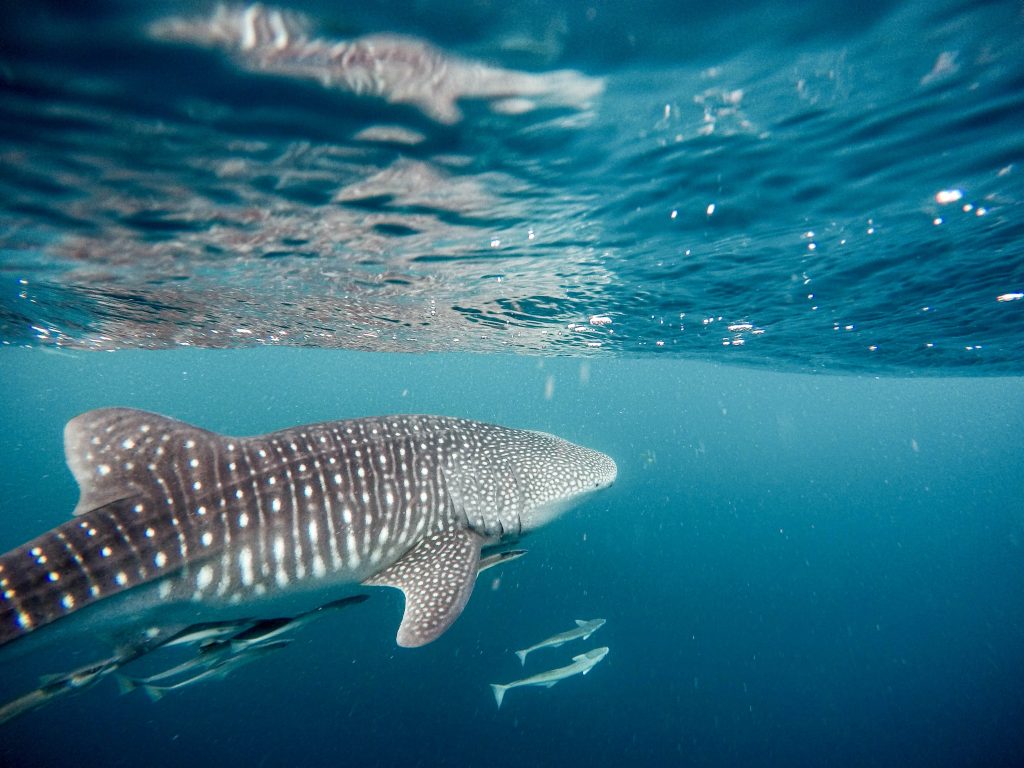 The Best Places in the World to Swim with Whale Sharks

Is it a submarine? No. Is it a whale? Almost, but no. Weighing up to 20 tons and measuring 18 m (60 ft) in length, whale sharks are the biggest fish in the world. Unlike their aggressive apex predator cousins, like great white sharks, whale sharks are harmless giants who feed on microorganisms and small fish.

These gentle giants with their incredible patterns often stand as a symbol for our love of the ocean. Though they are gigantic in size, they swim slowly and calmly. All of these characteristics make whale sharks incredible creatrues to swim alongside. In this guide, we’ll reveal the best places in the world to swim with whale sharks. Plus, we’ll show you how to do it safely and ethically.

The Best Places to Swim with Whale Sharks

Let’s dive into the best places to snorkel and scuba dive with whale sharks.

Located in the Province of Sorsogon, Donsol is a haven for swimming with whale sharks in the Philippines. From November to June, mature whale sharks flock to Donsol Bay to feed in its plankton-rich waters. Here you can go snorkeling with them and the interaction with these gentle giants is nearly guaranteed during the season. If you want to go scuba diving with them, you can visit the nearby Manta Bowl in Ticao Pass and go drift diving with whale sharks and manta rays.

Regardless of what side of the coast you go, Mexico is one of the few places on the planet where finding a whale shark is not difficult. Some tour operators offer a money back guarantee or a second chance if you don’t see whale sharks.

On the west coast, the waters of Baja California (through the Sea of Cortez) are rich with nutrients and microscopic plankton from November to May, attracting whale sharks to their waters. On your snorkel trip around Baja California (recommended areas are La Paz and Cabo San Lucas), you’ll likely see whale sharks skimming the surface with their mouth wide open, filtering the plankton-rich water.

Cancun and Cozumel are the best places to snorkel with whale sharks on Mexico’s east coast. Whale shark interaction is highly regulated and whale shark season is only open from June 15 to September 15. Isla Contoy, Holbox and Mujeres are the prime areas for snorkeling with whale sharks. As an added bonus, you can also interact with bottlenose and spinner dolphins as they often come near as you enter the water.

Ningaloo is Australia’s largest fringing reef that extends 260 kilometers (160 miles) long. Between March and April, just after the full moon, corals simultaneously spawn releasing large amounts of coral eggs. This in turn attracts filter feeders like whale sharks who are often surrounded with lots of small fish, like fusiliers. The peak of this coral spawning runs for 7 to 10 days and a large number of whale sharks congregate, making it a great time to embark on a snorkeling adventure. These creatures are so revered, the town of Exmouth hosts a yearly festival that celebrates all things whale shark!

Ningaloo’s whale shark season coincides with the peak season for tourists. Accommodation may be hard to find. Check out Ningaloo Reef Resort, a seaside stay with direct access to the reef.

If whale sharks are attracted to coral eggs in Australia, it is the mass spawning of snappers and groupers that attract them to filter the waters of Gladden Spit. Being a marine protected area in Belize, Gladden Spit is a vast playground for whale sharks where they take pleasure in consuming much of the fish eggs suspended in the water. While diving, you will see that it is both a spawning frenzy and a whale shark feeding frenzy of unfertilized fish eggs. You’ll also want to stay flexible, as this feeding frenzy only happens from March to June.

For your stay in Belize, check out Laru Beya Resort. On top of their ocean view suites and bedrooms, they also offer whale shark diving packages.

Located in West Papua of Indonesia, Cenderawasih is a large sheltered bay that is known for its stunning reefs and World War II wrecks. While the surface of this marine cove is relatively calm, there is a constant underwater battle between fisherman and the whale sharks as to who gets most of the fish. Your whale shark interaction is situated under a traditional fishing boat where whale sharks suck on fishing nets and extract small fish. You can either go snorkeling or scuba diving. Either way, you will clearly see how efficient whale sharks vacuum out the fishermans’ catch. Cenderawasih Bay is a popular liveaboard stop in Indonesia the vessel visit other world-class Indonesian dive sites. Check out the Calico Jack to experience sailing in style.

Wouldn’t it be amazing if you could spot a whale shark during your scuba certification course? That’s highly possible if you do it in Koh Tao. Despite being the smallest of the three eastern islands of Thailand, Koh Tao is a hotspot for scuba certification (since it is one of the cheapest places in the world), amazing reef diving, and great whale shark interaction. These gentle giants are mostly seen in the Southwest Pinnacle, Chumphon Pinnacle, Shark Island and Hin Wong Pinnacle where most of the whale sharks here are juveniles.

While Koh Tao is small, there are several hotels and dive shops to choose from and choosing one may take you an hour or two. Check out Koh Tao Simple Life Resort, a cozy 3-star stay with its own dive facilities.

Whale sharks are different from whales since the latter are mammals and the former are fish. But what if you can see both of them at one destination? You might get lucky and spot a variety of megafauna at Tofo Beach, on the southern coast of Mozambique. From June to January, you can see whale sharks while snorkeling and breaching humpback whales while sitting on the boat. These gentle giants pass by Tofo Beach during their winter migration. Other marine giants like manta rays, dolphins and sea turtles are also frequently found.

For your accommodation, you don’t need to go far from your dive site. Check out the 3-star facilities of Blu @ Tofo and you’re just minutes away from your whale shark interaction as it sits right at the beachfront.

If you haven’t explored the Indian Ocean, or perhaps, haven’t seen a whale shark, then the Ari Atoll of Maldives is a top choice for where to dive next. While there are 1,192 coral islands in Maldives, Ari Atoll is the best place to snorkel with juvenile whale sharks. Along the southern coast of South Ari Atoll, three-meter long whale sharks come to the shallow reef waters to feed. In fact, the Ari Atoll reef is a favorite place for these gentle giants–at least 200 whale sharks have been identified to come back and stop by for two months of the year, from May to June.

Would you rather watch whale sharks from the comfort of a boat, without getting wet? That’s the case at Mafia Island, Tanzania. Whale sharks come close to the surface, exposing their mouth, dorsal fin and tail fin. Two other elements that make whale shark interaction in Tanzania appealing? Whale shark spotting has yet to hit the mainstream tourism radar. Plus, whale shark season lasts from October to March, one of the longest whale shark seasons in the world. For your accommodation, check out the 2-star facilities of Big Blue Mafia Island Dive Center and Resort.

Usually, most of your whale shark interaction involves only these gentle giants and perhaps a few small fish that swim alongside with them. But what if you could dive with whale sharks along with other species of sharks? That’s the case of Ecuador’s Galapagos Islands, a hotspot for sharks. Here, you can see whale sharks, hammerhead sharks, Galapagos sharks, whitetip reef sharks and blacktip reef sharks all in a single dive.

While you are busy with all the shark interaction that’s happening underwater, it is tranquil and relaxing after the dive since you will be back onboard a liveaboard vessel. Since the Galapagos Islands are located 1,000 kilometers (600 miles) from mainland Ecuador, liveaboard vessels are your only choice when it comes to exploring this remote region. Check out the eco-friendly onboard facilities of the Galapagos Master and see for yourself if it fits the description of luxury and comfort combined.

How to Ethically and Safely Swim with Whale Sharks

Are you ready to swim with the world’s biggest fish? Before your trip, here are a few things to look for when it comes to choosing a responsible tour operator. Plus, a few tips to keep you safe.

Give space and don’t touch

Though whale sharks are gentle creatures, they are not pets and should not be touched. Touching whale sharks can cause stress, and swimming too close to them might disturb their behavior. Many whale shark swim operators will require swimmers to stay a safe distance away, for good reason.

It’s best to swim on the side of a whale shark rather than in front or behind. Swimming in front of the whale shark may cause them to chance course, or alter their feeding behavior. Swimming too close behind a whale shark and a snap of their tail could knock you out.

Whale sharks are highly attracted to where the food is. So when you give them food, you can expect that they will stay with you. This is the case for some destinations where they feed the whale sharks allowing tourists to spend more time with them. Please, do not feed the whale sharks. Otherwise, you are training them to lose their natural feeding instinct. This also disrupts their migratory behavior and puts them at risk of being hit by a boat.

What do whale sharks eat?

Whale sharks are filter feeders who swim with their mouths open, capturing food as they cruise along. The whale shark diet consists of plankton, fish eggs, and very small fish.

Is swimming with whale sharks safe?

Whale sharks are gentle creatures, and swimming with them is safe as long as you keep distance between you and the whale shark, are monitored by a tour guide, and have proper swimming skills. If you are not a strong swimmer, it’s best to wear a life jacket during your whale shark swim.

What’s the average size of a whale shark?

Is it ethical to keep whale sharks in captivity?

It is not ethical to keep whale sharks in captivity, such as whale shark aquariums. Whale sharks are large creatures that need plenty of space to swim and feed. If you want to see a whale shark, or swim with one, it’s best to do it in the wild with a responsible tour operator that respects the wellbeing of whale sharks.