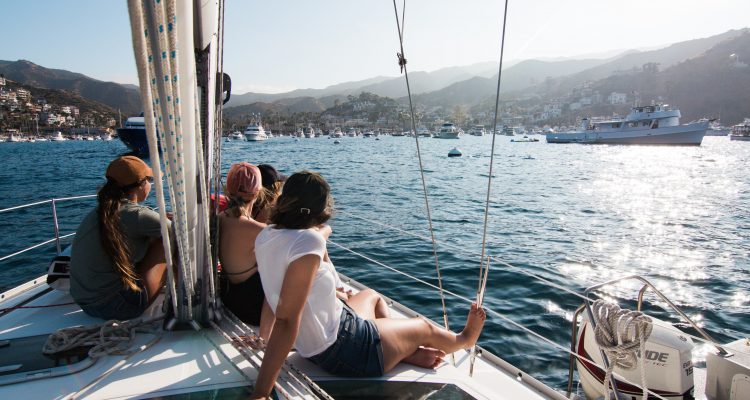 Want to Volunteer Crew on a Sailboat? What You Need to Know

So this is it. You’ve decided to take a Sabbatical year, you want to travel the world after graduating from university, or you’ve left your job to discover new continents before embracing a new career. So many women young and old dream of learning how to sail, discovering remote islands, frolicking on white beaches under coconut trees, exploring luscious jungles, foraging for lunch, and living a life of freedom and adventure at sea.

Some of these women are contemplating buying their own sailboat at some point, but first want to learn the ropes of the craft. Others women want to travel only by wind due to ecological considerations. All of these future novice (this is what beginner crew are called) female crew are enthusiastic, optimistic, trusting, and willing to work hard to live their dream.

What is volunteer crewing?

Voluntary crewing on boats, where you participate in navigation tasks and chores in exchange for a berth and traveling experience, has grown exponentially since the mid 2000s as more people started to travel the world in this way. Websites where captains could find crew, like Crewbay.com, Findacrew.net, Crewseekers.net, and Facebook groups dedicated to crewing welcomed more and more members, for better or worse, since little vetting is done on these websites. (This combination of high membership numbers and little vetting has had consequences in terms of safety, especially for crew). Thousands of people have therefore started to experience the joys of a life at sea, either as a captain, finding fast help to hold watches, polish the cockpit, or clean the hull, or as crew enjoying discovering the pleasures and challenges of navigation.

The risks of crewing as a woman

This all sounds amazing and doable indeed, but, it is important to mention the risks, especially for women and girls (some start these adventures in their late teens). Hundreds of voluntary crew, unfortunately unaware of these dangers, went through very traumatic experiences as a result of these risks not being mentioned on these platforms. The lack of vetting and follow-through with platforms have put some women at risk. Some were sexually assaulted by predatory captains. Like Hans Klaar, who was convicted for rape in 2011 and was found recruiting female crew in 2021 on Crewbay, where he then assaulted three of them. More recently, one woman has disappeared after joining a boat that was later found gutted by fire. This month, three separate sexual assault charges against sailboat captains in French Polynesia have been issued. The list goes on.

Being on a stranger’s boat, far away from home, sometimes in the middle of the ocean, depending on him for security, schedule, workload, or even food can be very dangerous if you are with an unstable or predatory person. Far from wanting to scare you adventurous ladies, it is important to be aware of these dangers. Unfortunately, stories of intimidation and assault by aggressive captains are not rare, and rarely are these stories posted in the media. I am trying to change this with a collection of victims’ testimonies and the Facebook group called “Sailing Safety for Women” I’ve created.

So, first of all, why don’t we hear about these stories? Well, as a start, because the victims are traumatized and ashamed. The abuse they went through is so harmful to their mental health, most of the time, that they do not want to recall the events by speaking about them with anyone. They want to forget. Also, they are ashamed of having been “tricked” by these toxic captains into joining a boat where they thought they would live a beautiful adventure with a man with high ethical standards and respect for women, as often we wrongly believe sailboats’ captains to be.

They quickly realized that this person who was charming on Crewbay, Findacrew, Facebook (there are many crewing groups on Facebook) and then WhatsApp, was in fact a manipulative person who succeeded in luring them to his boat in order to try and obtain sex from them, or be gravely abusive. Because they had no idea that this type of manipulation even existed, they feel guilty of having been victimized, which of course is not their fault at all. Sometimes, they were even threatened by the abuser with retaliation if they spoke out.

Lastly, isolated, far from home, vulnerable psychologically, sometimes not speaking the local language and/or having spent fortunes in order to reach the sailboat, they are in no position to try and press charges locally, which is required in most cases for a file to be opened. They therefore bury the trauma and try to live with it. As a result, no journalist has been truly made aware of the prevalence of this phenomenon. Now, more victims are speaking up, and the leisure sailing world cannot ignore them any longer.

Safety tips for crewing on a sailboat

So, how can you prevent this from happening to you? Well, we, as a collective of victims of such captains’ abuses and crimes, have developed a whole list of in-depth safety precautions and steps that volunteer female crew can find on the Facebook group, “Sailing Safety for Women.” We also have a registry of recommendations with reported toxic captains registered, as well as safe and supportive ones. You can consult it via the group in exchange for a donation, as managing the group is a full-time job.

Never embark on a sailboat alone

The golden rule is to never embark with a captain alone. The only exception would be if you know him extremely well, and have sailed with him on his boat before. In many cases, captains who are charming and well-loved on land may turn out to be tyrants after a few days at sea, sometimes putting crew’s lives at risk. If you haven’t, always ask to bring a crewmate with you (find one on crewing Facebook groups), or ask to be put in touch with the other crew foreseen prior to embarking. Do not embark alone, even if the other crew cancels: Some captains have indeed been lying about other crew coming in order to be alone with a female crew they’ve recruited. Unfortunately, assaults have happened on boats with couples or even families, so always be on your guard and self-aware. Avoid drinking alcohol on board, at least until you are sure that the atmosphere is healthy and the captain is safe. Once the energy is clear and boundaries for all are secure, you can feel more at ease.

Do not blindly trust crewing platforms and websites

Do not rely on platforms like Crewbay.com or Findacrew.net to weed out abusive captains.

In a testimony to Maritime Legal Aid, one woman (“C”) states, “I was assaulted by a captain and afterwards I reported him to Crewbay.com, the site where he found me. The reaction I received from Crewbay.com was very problematic, and they refused to do any prevention to curb those assaults despite me and other victims asking repeatedly for a year.” The woman then went to report the captain to Findacrew.net to alert them of the captain, where he was allowed continue posting crew recruitments.

Editor’s note: After more than a year of victims and advocates asking Crewbay to publish safety precautions alerting female crew of the risks of sexual assault and sexual harassment while crewing on sailboats (there were none on the website since its inception in 2004), Crewbay finally agreed to publish general safety tips. However, their safety tips do not cover the risk of sexual violence towards women and there have been no change to the platform. The specifics of this include users needing to tick a box stating they’ve read through these general safety tips. Victims must show a police report to have the captain removed, a major problem as most victims do not file police reports in fear of retaliation. The onus is once again on the victim to not get assaulted rather than the captain to not assault.

Reject captains who are looking for novice or lone female crew, request you be okay with nudity in advance, won’t provide references, asks for photos of you in a swimsuit, sends flirtatious messages, or won’t provide proof of their identity and credentials. When communicating, be clear in your expectations. What is the expected food cost? Will fuel and any customs costs be shared? What duties are expected of crew?

Do your due diligence with the safety precautions provided in the “Sailing Safety for Women” Facebook group, and don’t hesitate to offer advice everywhere you see female novice crew post, looking for their first sailing experience. They need to be informed as well. Lastly, we need to stand in solidarity with the victims, and demand crewing platforms and Facebook groups that they do everything they can to stop abusive captains stop from victimizing crew in total impunity, as is the case at the moment.

Leila Gold is the admin of the Facebook group “Sailing Safety for Women“ and an advocate for more safety and well-being for voluntary and professional crew on leisure sailboats. She has been sexually assaulted by a captain found via Crewbay.com on the first evening of her first crewing experience and has since then helped dozens of victims, and warned thousands of female crew about these dangers thanks to her Facebook group. If you wish to support her work, contributions to Sailing Safety for Women Patreon are greatly appreciated.