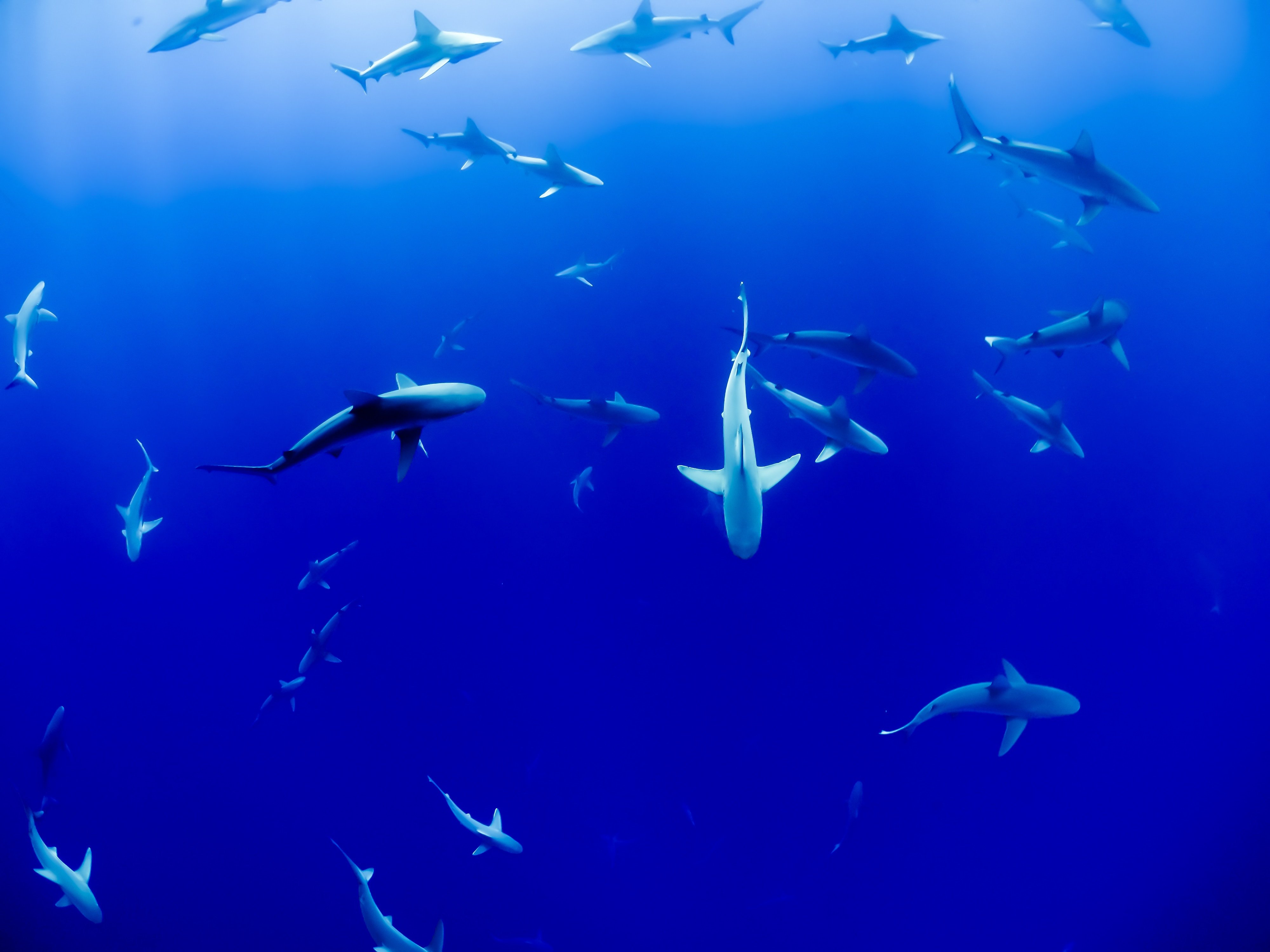 Over the past week, millions of people have seen and shared a video of Ocean Ramsey grabbing onto the fin of a great white shark off the coastline of Oahu, Hawaii. Many viewers saw this as inspiring — a woman connecting with one of our world’s most notorious monsters.

Ocean Ramsey is just one of many social media celebrities who gather likes by swimming with and grabbing onto the fins of gargantuan sharks, all in the name of conservation.

Or so they say.

While there’s no doubt that Ocean Ramsey and her team do important work when it comes to data collection and exposing the outside world to how incredible marine life like sharks can be, videos like these do more harm than good.

One of the greatest principles in conservation is to look, don’t touch any form of marine life whenever possible. This is a such an essential concept, it’s one of the first things we teach children when they take a school field trip to the tide pools.

Of course, an exception to this principle is when scientists perform research that requires handling the animal or when the animal would benefit from being touched (releasing them from a tangled fishing net, treating a wound or ailment, beaching, etc).

The sharks that Ocean Ramsey touched received no benefit from the interaction. The female sharks that she interacted with were likely pregnant and in the midst of feeding on a whale carcass when Ocean Ramsey approached. According to an account by the Marine Conservation Science Institute, the viral video created so much attention, swimmers flocked to the site of the whale carcass and scared away the sharks in the area the next day. Meanwhile, Ocean Ramsey was able to promote her wetsuit line, GoPro sponsorship, and her social media presence with each news story and video view.

In just about every video that Ocean Ramsey features as part of her media experience on a Freedive With Sharks website, she is seen grabbing onto the fins of sharks. There is no reason to touch sharks so regularly and even if there was, why promote this behavior to thousands of impressionable Instagram followers?

This video was posted five years ago and shows Ocean Ramsey, swimming up to a shark, grabbing onto the dorsal fin, and holding on for a ride. So much for the “gentle redirection” explanation that’s frequently pulled out.

Ocean Ramsey and her partner, Juan Oliphant, have addressed the images of them touching sharks in the past.

Ocean says via an Instagram post, ” I always discourage people from touching sharks and we don’t allow it @oneoceandiving unless its to deter.  I’d love it if the drama-bully-haters who criticize me for touching would spend the same or that or ANY energy and effort into criticizing #sharkFishermen #sharkFishing #sharkFinning #SharkFinSoup or put any effort into criticizing something that actually harms and kills sharks.”

Why can’t conservationists be upset at both actions? Shark finning is bad, true. However, disturbing wildlife by physically swimming into their space and touching them is also bad. Nobody is claiming that Ocean and her crew are just as bad as those who kill sharks for their fins. Murder is bad. Harassment is also bad. This isn’t a tough concept to understand.

We do not have to frown upon just one type of bad behavior in the ocean. If anything, the conservation work that Ocean and her partners put into saving the lives of sharks have created a sense of entitlement and a false understanding of an ancient creature. Working hard towards shark conservation does not create an immunity to legitimate criticism.

Their goal of promoting shark conservation could be conveyed through inspiring media where grabbing onto sharks doesn’t occur. We all know that a great white shark could bite and kill any diver that swims next to it — video footage of Ocean or Juan kept at a distance is enough to show this.

Remember Timothy Treadwell, the man who lived among Grizzly bears and was eventually eaten by them? He was often seen touching the bears, claiming that man and bear had developed a respect for one another. Three years before he was eaten, he wrote, “I came here and protected these animals best I could. In fact, I’m the only protection for these animals… How dare [the government] smear me with their campaigns. How dare they, when they do not look after these animals themselves. And I come here in peace and in love—neutral, in respect.”

Ultimately, the goal for how society views sharks should be similar to how we view land-based predators. We admire and respect terrestrial predators like lions from a distance — with millions of dollars spent in safari tourism to see lions in their natural habitat. Lion conservation is typically centered around the idea that they should be admired in their own environment, from a safe distance. Would the public be as enamored if we saw a young, beautiful woman who regularly rode on the back of a lion in the Savannah? I hope not.

Presently, the world has an unhealthy fear of sharks. We all know the statistics when it comes to how unlikely one is going to be killed by a shark (a cause of death that is 100% preventable if you stay out of the ocean). The message that sharks should be understood, respected, and revered rather than solely feared is what self-proclaimed activists like Ocean Ramsey and Juan Oliphant claim to convey.

When humans get bit, sharks lose

It’s only a matter of time before the next impressionable shark conservationist swims up to a shark and grabs onto a fin (with a camera filming their every move, no doubt). Provoked, the shark will bite and the cycle of sensationalized media perpetuating the fear of sharks will begin again.

Beauty and the beast

Videos of gargantuan incredible great white sharks have been circulating around for decades. Why did this one garner so much attention?

How much of the obsession with this video and Ocean Ramsey in general has to do with the beauty of sharks versus the beauty of Ocean Ramsey? While beauty is in the eye of the beholder, Ocean Ramsey embodies Western society’s version of beauty. Would the video be as captivating if we’d seen a conventionally unattractive person swimming up to a shark and grabbing onto it?

Shark tourism is a controversial subject. Whenever we enter another animal’s environment, it is impacted in some way. The question is, how can we interact with animals and leave their habitat better than we found it? This is why shark diving and shark tourism in marine protected sanctuaries (where fees collected by dive operators and government go towards habitat preservation) are an inspiring alternative.

If you want to follow the work and media captures from researchers who follow basic conservation principles, marine biologist Dr. David Shiffman has compiled a list of shark researchers that’ll keep your feed occupied with feel-good shark media for days.