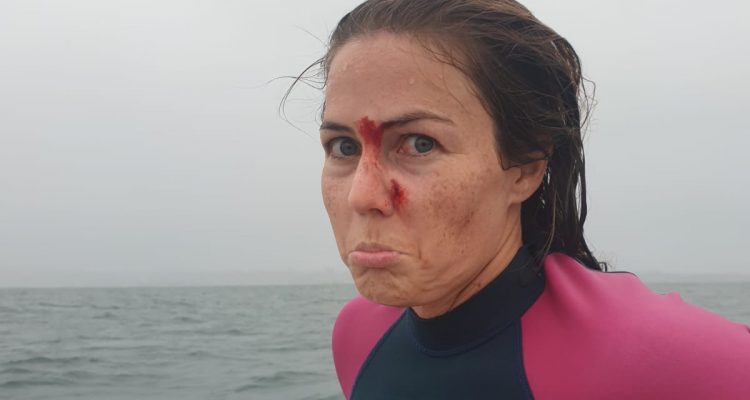 Disclaimer: This post contains unflattering images of my face.

My local surf spot and I have had a tumultuous relationship over the years. Some days, I’m happy to paddle for any wave that comes my way. Other days, I sit on my board in fear, internally berating myself for not having more gall. The wave I frequent is a fast righthand reef break off of Viti Levu, Fiji’s largest island.

After not surfing for a month, I finally got a chance to paddle out on a Saturday afternoon. The waves were pretty big (for me), and I’d sat a bit inside for most of the three-hour session nipping in on some of the smaller waves coming through. It felt good to be back in the water, and my fear of the water seemed dormant, left behind on shore.

The next day, the skies were grey and a drizzle of rain cloaked the city. But everyone had an air of desperation to go surf anyways, so we ventured out to the surf in spite of the rain and the wind. The waves were big and wobbly, colored dark by the rainclouds above. It was fun to just be in the water despite the fact that during non-pandemic times, I might not have bothered to paddle out.

I got caught inside a few times and tossed around. On big days, it’s rare that I don’t get caught inside at least once or twice, forced to paddle a lap around the reef. Every time I tumbled, I covered my head, relaxed, and used my foot to push off the reef if I got too close.

After a few waves, the surf session was winding down. We were all keen to catch a few more and head in so we could make it back before afternoon curfew.

I paddled for a wave, it looked steep, and I pulled back. My board and I went with the lip of the wave, tumbling over the falls.

I heard a loud crack, like a snapping tree branch, and felt a rush of heat across the left side of my face. Shit! Am I going to black out? I can’t black out! I wondered if the cracking sound was my skull, particularly my left eye socket. I was held underwater for a few more seconds. When I surfaced, I waved and yelled for help before the next wave.

A few seconds later, my partner was next to me. He told me to hold onto my board and paddle towards the boat. My nose was covered in blood, and I could see it dripping into the water. I tried not to think about what it’d mean if my wounds were serious. The vision in my left eye was a little blurry, which worried me most. I started crying partially because of the pain but also because of the frustration I had with my own fears around surfing.

My friend readied his boat for us to go back to shore. He called his partner, who works as a vet at a nearby animal shelter. She rushed over with a first aid kit and cleaned up my wounds. Fortunately, the cuts on my face didn’t look too deep and wouldn’t need stitches.

Back at home, my partner applied a few butterfly bandages to the two cuts on my face. The left side of my face and nose felt really sore, and the lower part of my eye started to bruise. The large crack I’d heard underwater wasn’t my skull, it was the sound of the fin box breaking.

Over the next few days, my face swelled—I looked a beluga whale. Two weeks later, the swelling disappeared and I removed my bandages, revealing one scar on my forehead and one on my cheek from the fins.

My biggest fear was that the incident would make me too scared to surf at that spot again. But, just before this had happened, I’d bought a cool secondhand 7’6″ mini mal I was desperate to try out. Three weeks after the accident, I paddled out during a tiny day and had a blast on my new board. Since then, I’ve surfed a few more times—small and decent size days included—and I don’t have the all-encompassing panic I thought I’d have.

Accidents happen in the water, and not all can be prevented. To date, the largest injury I have from surfing happened on a boat ride out to the break. The boat hit some chop and the wooden seat bench I was sitting on collapsed onto my ankle. Over a year later, I still have a knot and a bruise on my lower leg.

Covering your head (and your face) is an essential reflex to build as a surfer.

Unfortunately, It seems like I could still use a bit of work on that front.