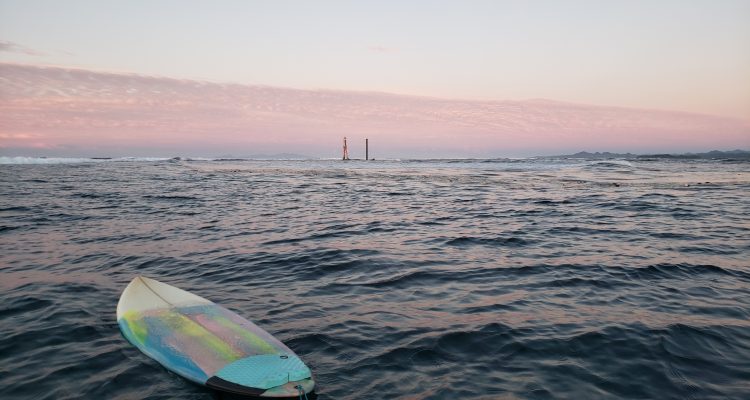 Should You Surf in the Rain?

If you’ve grown up surfing near a large city, you’ve heard the warning. Never surf within three days of heavy rain. Your cousin’s friend’s sister did it and caught pink eye that lasted for six months. Your uncle’s friend’s dog did it and lost all his hair. Your dad’s coworker’s uncle also did it and hasn’t been seen since… What’s the hype about surfing in rain and after it rains? Is it really that dangerous?

In this article, we’ll cover the dangers of surfing in the rain and tips for how to stay safe if you get caught out.

The Dangers of Surfing in the Rain

Water contamination is the largest health risk when surfing in the rain or after a heavy rain. When torrential rains occur, flooding and freshwater runoff is driven out to sea–often carrying sewage, oils, rubbish, and other pollutants with it. Here’s the thing. Some, if not most, popular surf spots are located near urban areas. This is the reason why health experts don’t recommend surfing or doing other ocean sports during and after a rainy day.

On top of trash, some of these pollutants and contaminants include untreated human and animal waste, pesticides, fertilizers and they drastically increase the level of water pollution in a short period of time.

Freshwater runoff from cities and urban areas can affect water quality. A good manifestation of this condition decline is water color where it can get turbid or murky. However, what you should be conscious about is not what you see on site, but what you see under a microscope. Amoeba, E coli, protozoa and other disease-causing pathogens live and thrive in great numbers.

When you exposed yourself to contaminated waters during surfing, the chances of being infected and contracting diseases is high. Skin rashes, eye redness, itching and allergy are some minor medical conditions that you may suffer. But it will be a different case if you accidentally swallow and ingest contaminated water where you can suffer from gastroenteritis, hepatitis, dysentery, diarrhea and respiratory illnesses.

If you’re in a remote area, water contamination is less of a risk after rain.

Despite its extreme rarity, there’s a very small risk of being hit by lightning while surfing. Lightning strikes had already claimed the lives of surfers. In 2014, a lightning strike killed one surfer and injured 13 others in Venice Beach, California. In another recent case, a Tokyo Olympic qualifier and surfer Katherine Diaz Hernandez instantly killed when lightning struck her as she was training at El Salvador’s El Tunco beach.

Knowing the weather report before going out is a good practice. If the forecast is all clear, then proceed with your surf. However, if there’s lightning and thunderstorms on the forecast, it’s safest to stay at home and wait for the weather to subside.

During heavy rains, it’s harder to see where you’re at on the water. While this isn’t a big deal at a small breach break, it’s dangerous if you’re surfing a remote reef. Large squalls can be disorienting, and you may not know where to go. If you’re caught in a squall while surfing remote waves, get away from the wave’s impact zone and assess your next steps. If your boat or land is nearby, it’s best to wait a few minutes for the rain to clear before paddling in. But, if it’s unrelenting, make your way to safety as calmly as possible.

If there’s just been heavy rain, wait 72 hours before surfing again. This allows enough time for the water to clear of contaminants and debris.

Based on studies, surfers have suffered from infections as long as two days after it rained. Contaminants, bacteria and pathogens take time to settle in and be carried away by waves and current.