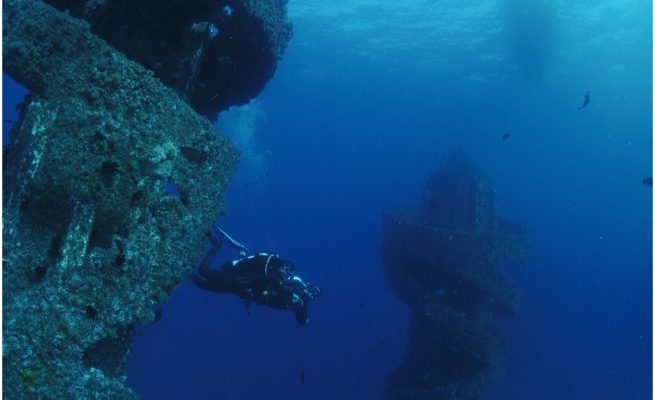 Wonder Reef is the world’s first neutrally buoyant artificial reef, built from nine metal flute structures chained 22 meters above the seabed just off the Gold Coast shoreline. Shortly after its launch, just over a year ago, small creatures took residence in the reef. Shortly after, larger critters followed. It’s quickly becoming one of the most prolific reefs in along the coastline, and local divers claim they’re seeing new species each week.

It’s 7:00 AM and I’m a little early for the dive briefing. One of the dive masters at Gold Coast Adventure Divers pours a cup of hot tea to sip while we wait for the other divers to arrive. A small layer of mist lingers over the Runaway Marina, weaving in and out of the sailboats.

The sunshine soon burns off the fog, revealing blue skies overhead. The other divers arrive, and we each pull 5mm of neoprene over our waist. Gear in hand, we pile into the dive boat and buzz out of the marina into the open ocean. In the distance, we spot tufts of white spray—the aftermath of a breach or tail slap from migrating humpback whales. Every year, thousands of whales migrate from the frigid, nutrient-dense waters of the Antarctic up to the warm waters of Queensland, Australia to mate and give birth. There’s so many of them, the region has been deemed the Humpback Highway.

The boat moors onto one of the three mooring balls bobbing above Wonder Reef. The glimmer of the Gold Coast skyline dazzles in the distance. We each put on the rest of our gear and descend into the water, leaving all semblance of urban life behind.

The visibility is low thanks to a large swell that rolled through within the past week, churning up the seabed. We fin our way to the first structure in the reef, an impressive swirl of metal encrusted with marine life. A scorpionfish hides in one of the under hangs. A thick rope connects a trio of flutes, and we fin our way to the next.

The haunting song of a male whale singing acts as background music to our dive.

One by one, we swim through an opening in the in the structure—it’s just wide enough to let us through. At the rate things are growing on the reef, it’s unlikely the hole with be big enough to swim through next year. Each flute is shaped slightly different from the rest, giving it its own feel. They sway slowly with the surge, almost as if they themselves are alive.

There’s something beautiful yet dystopic about diving an artificial reef. When they’re new, you still feel the strong influence of a human hand on mother nature. However, like a sunken ship, the sea quickly claims the foreign objects as its own, swapping smooth surfaces for coral terrain and welcoming small fish which in turn attract larger fish. Already, Queensland groupers, the largest groupers in the world, have taken refuge at the base of the flutes.

Back on deck, we warm up with a cup of steaming soup and see a newborn calf a mere fifty feet away from the dive site. Her mother appears shortly after.

The biggest risk to the reef, one of the dive guides muses, is that the structures could be taken out by a whale looking to scratch an itch on the perfect surface.

Conditions: Water temperatures average 65°F/18°C from June to August (Australian winter) and around 78°F/25°C December to February (Australian summer). Visibility is largely impacted by strong surf and winds due to its sandy seabed, so keep an eye on the weather window.

When to Go: Wonder Reef is a year-round dive destination. If you want to combine your trip with whale watching, come over May to October. The best time to surf on the Gold Coast is from December to April.