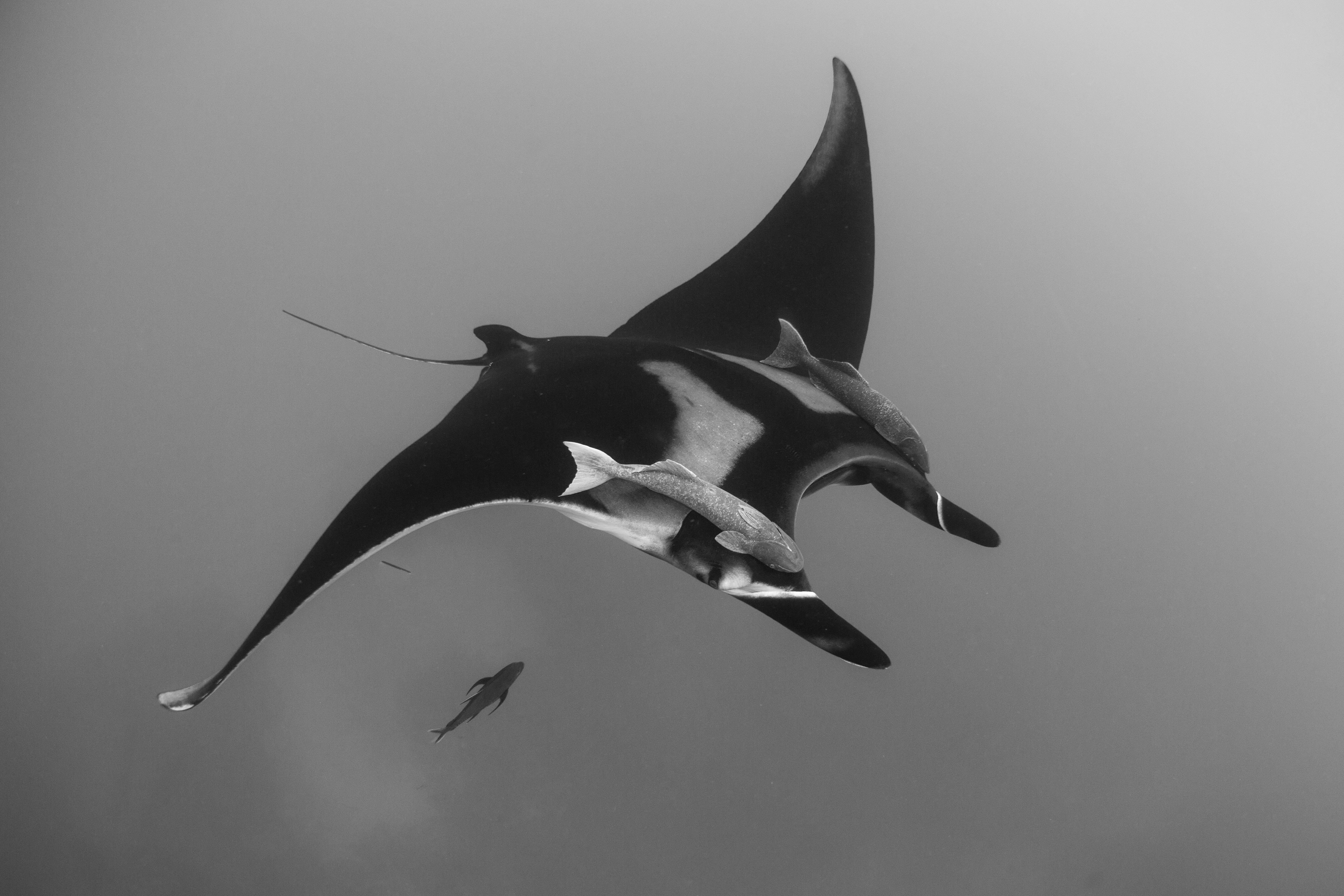 We saw a manta ray again. Just like yesterday.

It broke the surface of the sea, breaking ripples as it skimmed just beneath and nearly alongside the boat, and flapped its triangle fins out of the water.

Although we were actually on the way to a dive site, the encounter was too beautiful to pass up. Our guide from Dhigurah’s Island Divers motioned for the skipper to cut the engine, and signaled us to enter the water for a snorkel. Most of us gladly obliged. Only Venky stayed on the boat. Although he scubas a lot, he doesn’t feel a confident enough swimmer at the surface. 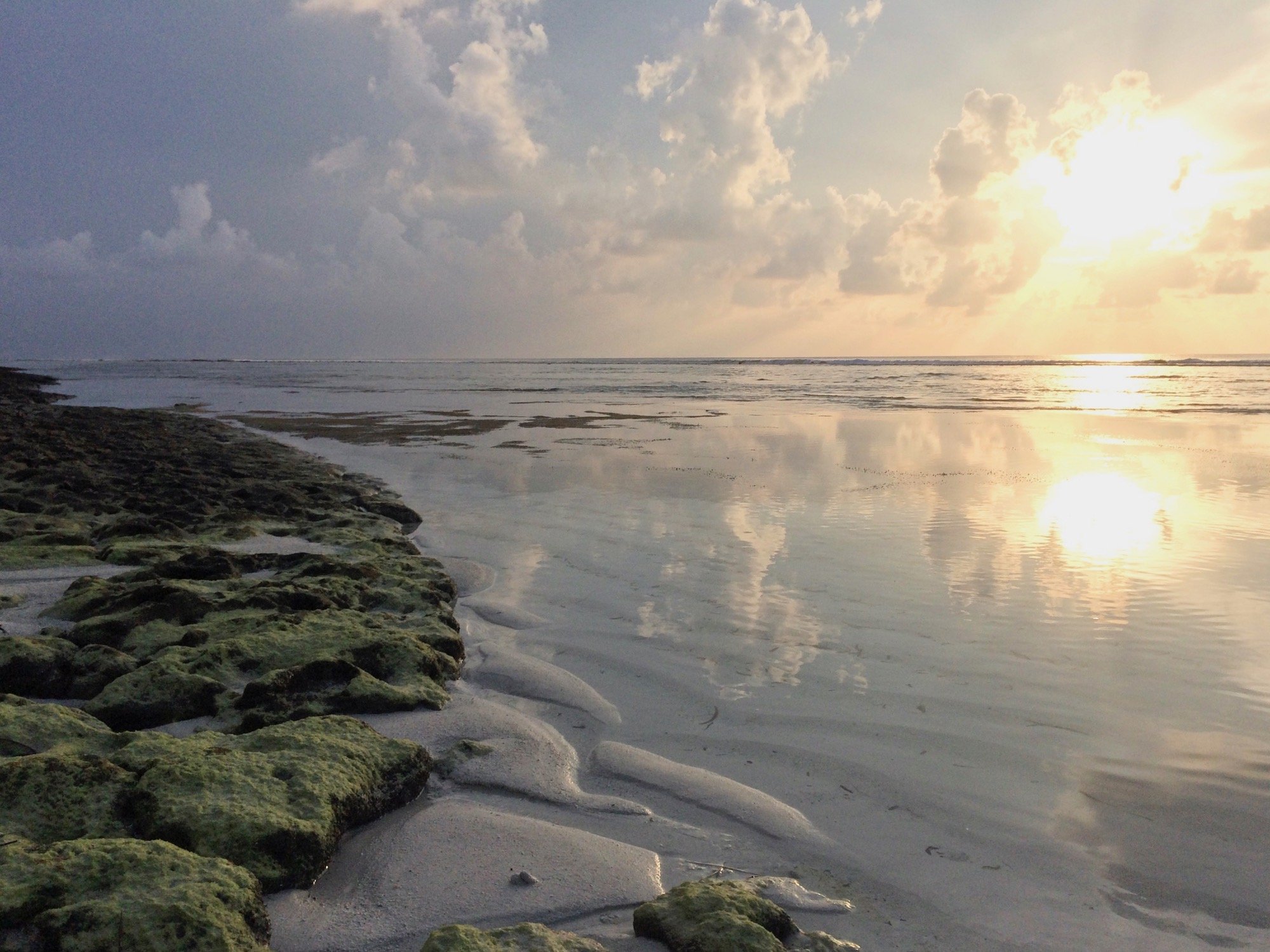 In the water, we approached the lone manta and watched as it swam, sank under the waves, and eventually swam away.

Feeling pleased over how the excursion began, we came back onto the boat. Off we started once more to our dive site. Venky asked to see our photos of the manta. My hand had grown steadier with the camera since the first time I was in the Maldives for a whale shark volunteering program, and I was pleased he noted it.

We didn’t get too far before there was a commotion. One of the guides had spotted the manta again. It seemed they thought it was the same one. The dive master thought a moment, and allowed us to return to the water.

The manta stayed a bit longer this time, swimming before us. It was joined by another manta far below, and I followed, gaze intent upon them. They stopped near a dark form, a kind of boulder perhaps. I was absorbed with filming them and paid no attention to my fellow snorkellers.

That is, until one of them shook me by the shoulder. Signalled for me to return.

I was confused. But why? The mantas, they’re down there! My buddy was making hand signs I couldn’t make out. But I followed anyway.

Getting dressed for the theater

Up on the boat, I quickly discovered why. It was obvious. My fellow divers were all busy gearing up.

“They see the mantas hanging around a bit of coral,” my buddy Emma told me.

Apparently the dive master had decided to seize this dive opportunity instead of heading to our original dive destination.

It made perfect sense to me.

Arriving for the matinee.

We got in the water, and sank without delay.

Wary of disturbing the circling mantas, we slowly swam and breathed our way closer. But the manta rays showed no signs of being at all fussed by our presence. Out of the corner of my eye, I saw Arvind holding up his underwater camera. This was good – I left my own camera on the boat, as it couldn’t cope with diving depths. 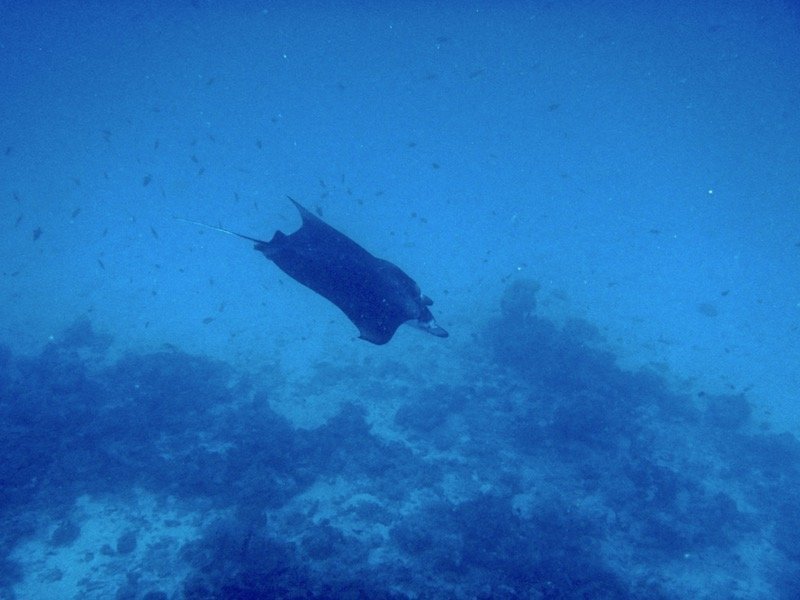 The manta pair were impressive individuals. They swam gracefully together, sometimes in tandem, and sometimes over and under each other, in a languid sort of choreography. We hovered in a loose circle just over the coral bommie, and again, I was mesmerized.

I couldn’t believe it. The first time I came to the Maldives, just four months before, I had received an incredible manta ray encounter already. I didn’t think it would be topped quite so soon. But here were two rays, not just a single one. Not catching a fast current leading me away to the unknown, but staying, dancing, mirroring each other. The romantic in me was smitten.

Get seated, ladies and gentlemen.

Looking around, I saw someone (I don’t remember who) signal for me to kneel. I didn’t put two and two together for a heartbeat, until I looked down to see the others sink gently to the seafloor on their knees around the bommie.

Of course! That’s a much better vantage, and even less work. Soon, we were all seated for the show.

From this vantage the manta rays were even more impressive. They swooped overhead with flowing strokes, the wide white expanse underside striking to the eye. Speckled, near the claspers behind. Cleaner wrasse swam close underside, matching pace, and schools of tiny reef fish scattered about like backup dancers.

We watched their gills flicker open and shut – one twitched irritably when a cleaner fish went the wrong way up a gill.

To be honest I don’t know why it was so mesmerising. We were only watching one thing, and going nowhere. And yet we were all content, just breathing, breathing our awe in a confetti of bubbles. They continued their lazy circling dance. One of them rose against the bommie. I could see the heart print just faintly powdered onto its dark, broad back.

I began to feel fatigued. The kneeling position was not agreeing with me – I was getting a cramp. But I didn’t wish to move either. Finally I decided to stretch out, slowly breathing in, shifting my legs in their steampunk leggings back one after another, and sighing back to the floor.

A third manta arrived. For a time there were three, swooping and crossing against each other, spinning round and round the bommie. Tails curving, and fins undulating, wheeling on and on.

We stayed there a long while. Air lasts a very long time when you’re fairly shallow (we couldn’t be much more than 10 metres) and not moving. Finally, I thought. I secretly felt as though I was getting a bargain.

After a time, the third manta went away, but another approached. The mantas alternated, coming closer to the bommie and sometimes finning a wide arc away. And I lost track of which ones were which.

But finally, one of the mantas left, leaving two once more. They danced together for a little while, and then one of them took a bow, and exited the stage.

The final manta ray swooped over us and circled around a few more times. And then it too, angled wide, and swam away into the cobalt sea.

Among the diver’s signs that I have learned, one is missing: applause.

Enjoyed this post? Read more of Teja’s stories on diving in the Maldives on her blog, Teja on the Horizon.

Want to see the manta rays for yourself? Check our our guides to the best dive resorts in the Maldives and incredible Maldives liveaboard trips!