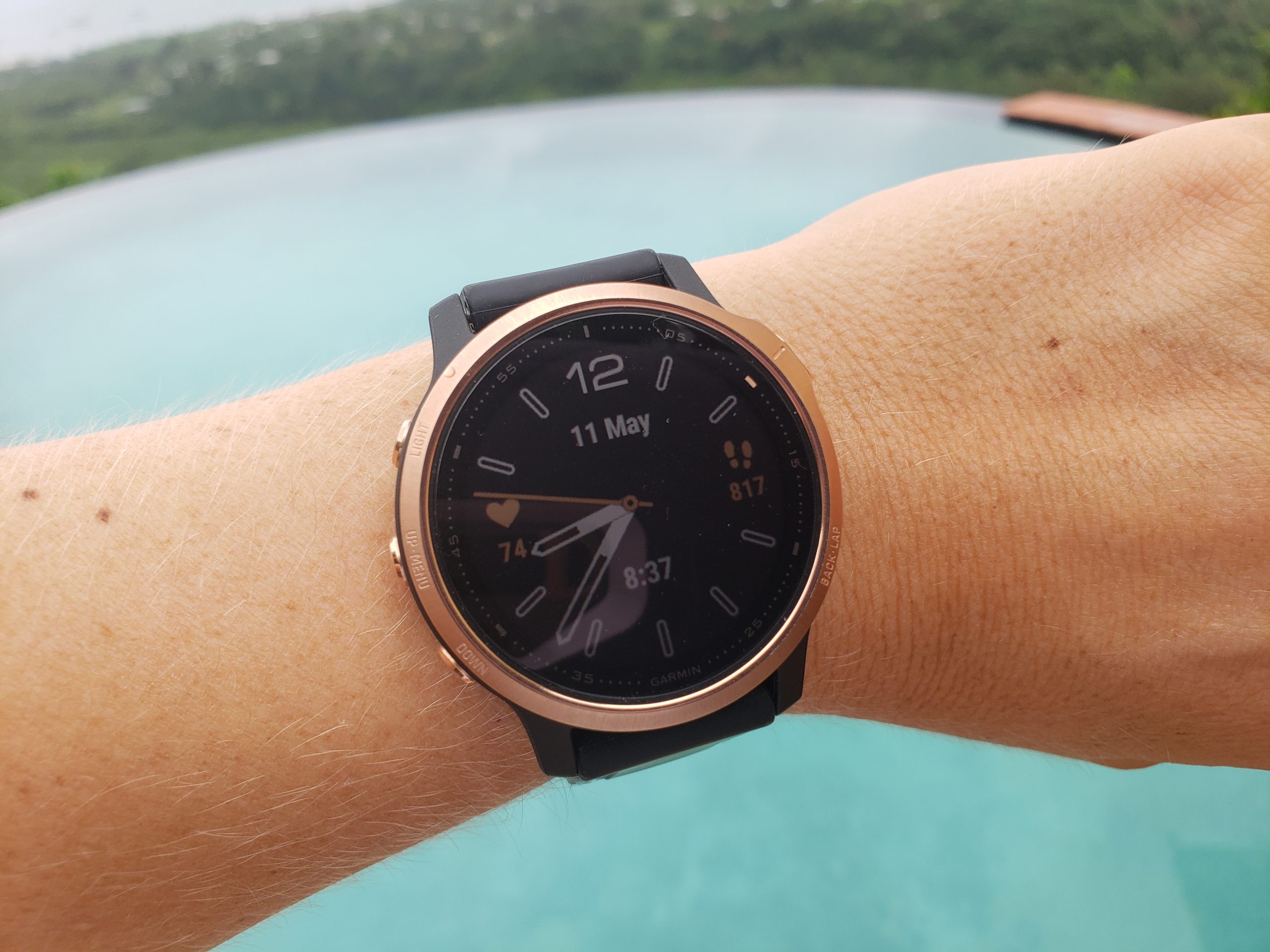 If you’re an athlete who does multiple sports, buying a fitness watch can be overwhelming. As someone who loves to surf and SUP but also run, swim, and cycle, I searched for months for a watch that can do it all. For a while, I even joined forums and groups dedicated to Garmin watches (apparently it’s a thing). Finally, I settled on the Garmin Fenix 6S Sapphire as my everyday surf and fitness watch. The Garmin Fenix 6S is smaller than the Fenix 6 and 6X models, making it one of the best Garmin watches for women or athletes who prefer a sleeker watch.

This post is not sponsored—we paid full price for the Garmin Fenix 6S Sapphire. This post contains affiliate links. This means that if you make a purchase from any links on this post, we may earn a commission at no extra cost to you.

Buy on REI | Buy on Amazon

When you consider the size options, pro vs standard model, watch face options, and color combinations, choosing the right Garmin Fenix is quite overwhelming.

I settled on the Garmin Fenix 6S Sapphire model for its small size and robustness. For my lifestyle, the solar charging capability is not worth the extra cost. If I ever do want to charge this watch on long treks, I’ll connect it to a solar charging power bank as this watch charges via USB cable. I did want the pro model for the PacePro feature and phone-free music capabilities.

I was really impressed with the build quality and sleek frame of the Garmin Fenix 6S. Depending on the watch face, the Garmin Fenix 6S can still look stylish when worn with everyday clothing–especially compared to the Garmin Instinct or Forerunner series. (I know, beauty is on the wrist of the watch-holder…) The start-up tutorial on how to use the watch was very helpful, and within a few hours, I had my watch fully customized to my preferences. While some Garmin Fenix 6S reviews claim the watch face isn’t intuitive, it’s easy to get used to once you grasp a better feel on the functions of each of the five buttons.

Capabilities of the Garmin Fenix 6S

The Garmin Fenix 6S has tens of sports options to choose from; running, trail running, track running, swimming, cycling, hiking, rowing, climbing, skiing, golfing, and more. Plus, there are workouts pre-loaded into the watch with helpful guided animations, like yoga and HIIT training.

The watch is capable of storing 1000s of songs and podcasts, allowing you to run phone-free.

On long treks, you can turn on Garmin Fenix 6S’s expedition mode, which stretches the battery life to last for weeks in a low-powered GPS mode.

The most exciting features of the watch for The Salt Sirens readers is no doubt its ability for the sports watch to be converted into a surf and SUP watch.

The Garmin Fenix 6S Pro really shines when it comes to tracking runs. As I train by heart rate, the watch notifies me when I’m on my target pace or within my target heart rate range. The GPS tracking is accurate, so long as you start set the GPS before your run begins.

If you’ve uploaded your runs from another training platform, like Training Peaks, it will take a few runs to figure out your preferences when it comes to notification settings. But once this is dialed in, interval training becomes so much more fun when you don’t have to rely on memory or look at a phone when deciding what comes next.

The Training Peaks sync feature, however, isn’t perfect. When two runs are scheduled on the same day, the #2 run can be uploaded into Training Peaks even though you completed the #1 run.

The watch also measures fine-tune elements of your run like ground contact time, left and right foot symmetry, vertical oscillation, cadence, and stride length. While these features aren’t particularly useful for casual runners, elite runners will likely love tweaking their stride based on this information.

The PacePro feature is a major highlight, guiding your run through target pacing and prompts. You can also pre-load a route and navigate on your wrist, or search for new routes based on popular running trails in your area.

Many users also like the incident detection feature, which alerts your emergency contacts to your location if an accident is detected. If I’m venturing far from my car, I tend to run with my phone anyways, so I haven’t put this feature to the test just yet.

I’ve also used the watch to guide yoga and cardio sessions. While I did use the guided yoga feature once, it was slightly gimmicky with a beeping countdown alarm alerting you of the next pose. Constantly checking your wrist doesn’t exactly bode well with moving meditation, so I likely won’t be using it for this feature again. However, the guided cardio workouts are very fun to do, especially when you’re stuck inside doing home workouts or want to squeeze something in between other adventures.

One of the most frustrating things about this watch is while it’s marketing includes surf-friendly capabilities, Garmin’s official surf app is only for iOS users. However, if you are an Android user like me, it’s still possible to convert the Garmin Fenix 6S into a surf watch.

To track your surf sessions, iOS users can download the Garmin Surf app. For Android users, download the Surfing app published by AledThomas. This app can track wave count, time on wave, distance covered, waves per hour, and max surf speed. However, there are some complaints about the accuracy of this data. Thanks to lockdown, I haven’t had a chance to test these features out myself (check back for an updated review). Some users state setting the watch to the in-watch SUP feature can also count waves.

The Garmin Fenix 6S has the capability to track sleep, and in theory monitors your deep, light, REM, and awake phases of sleep. However, there have been times where the watch registered me as asleep while I was watching a movie, and didn’t include a midnight trips as ‘awake.’ I find this feature interesting, but wonder about the accuracy of each phases. I wouldn’t recommend this watch if sleep tracking is one of the top reasons for getting a sports watch. Other athletes claim Fitbit does much better in this realm.

Data from the Fenix 6S is uploaded to the Garmin Connect app, an all-in-one app that displays any relevant fitness and health data like:

You can add and subtract data fields as you see fit.

Compatibility with other apps

One of my favorite things about the Garmin Fenix 6S is its compatibility with other apps. It easily syncs with apps like Training Peaks and Strava. Because I plan all my runs on Training Peaks, I love being able to complete the workout at the touch of a button and follow the prompts. This is a major upgrade from having to memorize workouts, or constantly look at my phone on the run.

Verdict of the Garmin Fenix 6S Sapphire: Is it worth it?

The Garmin Fenix 6S Sapphire is an amazing sports watch for women who want a powerful watch that doesn’t have the aesthetic of a clunky data tracker. It’s running features are top-tier, and the gamut of other sports capabilities make it one of the best all-around sports watches on the market.

Buy on REI | Buy on Amazon

FAQs about the Garmin Fenix 6S

Is the Garmin Fenix 6S worth the money?

If you plan to use many of its gamut of features, the Garmin Fenix 6S is definitely worth the money. There are cheaper sports watches on the market, many with similar features to the Garmin Fenix 6S. For example, the Forerunner 945 is almost the same watch but built with cheaper materials. Otherwise, consider the Fenix 5S.

The Garmin Fenix 6S is not touch screen. This is likely because many users wear the watch while swimming. Water can heavily impact the use of touch screen sports watches, hence the 5-buttons.

Is the Garmin Fenix 6S waterproof?

Yes, all Garmin Fenix models, including the Garmin Fenix 6S are waterproof. They are meant to be used while swimming and during other water sports activities.