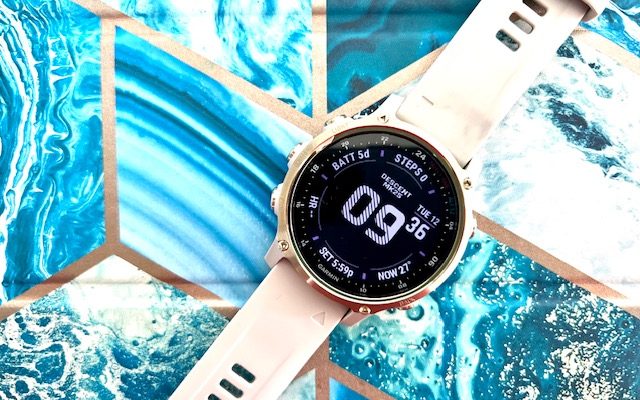 In this guide, I’ll cover the pros and cons of the Garmin Descent Mk2S and take you with me as I test it in multiple sports.

This post is not sponsored, but we were given the Mk2S for review after we published a review on the Fenix 6S (paid for by us). This post contains affiliate links. This means that if you make a purchase from any links on this post, we may earn a commission at no extra cost to you.

Buy the Garmin Descent Mk2S on Amazon or Scuba.com

The Garmin Descent line comes in multiple models. At 43mm, the Mk2S is the smallest with Mk2/Mk2i being larger versions at 52mm.

I prefer the Garmin Descent Mk2S for its small size and robustness. During my 10s of dives with the Descent Mk2S, I never wished I had air integration. Having it be sleek enough to wear in non-diving activities means I only need to have one fitness watch for all sports–and daily living.

Because I already owned the Garmin Fenix 6S, I wondered if I would realistically reach for the Garmin Descent Mk2S over the Fenix 6S in daily life. But, I was impressed by the small size of the Garmin Mk2S and how stylish it was. It’s a little larger than the 6S, but this is only obvious when you compare them side-by-side. And, the Mk2S is still smaller than most other dive watches on the market. The customizable watch face means the Descent Mk2S can look sleek when paired with everyday clothing. It felt robust enough to handle getting bumped around on boats without getting too scuffed.

I decided to travel for two months on a diving and hiking trip to French Polynesia solely with my Garmin Descent Mk2S, leaving the Fenix at home. While the Descent Mk2S is a little bit thicker, the only time I noticed this addition in size was when I went to sleep. Eventually, I got used to it.

Capabilities of the Garmin Descent Mk2S

While marketed as Garmin’s scuba dive and apnea watch, the Garmin Descent Mk2S has tens of sports options to choose from; running, trail running, track running, swimming, cycling, hiking, rowing, climbing, skiing, golfing, and more. Plus, there are workouts pre-loaded into the watch with (somewhat?) helpful guided animations, like yoga and HIIT training.

The watch is capable of storing 1000s of songs and podcasts, allowing you to adventure phone-free. You can also pay via the watch.

The most exciting features of the watch for The Salt Sirens readers is no doubt its ability for the sports watch to a scuba, freedive, SUP, and surf watch. She’s no one-trick pony!

Out of the box, the Garmin Descent Mk2S is set up primarily as a dive watch. On the primary menu, you’re greeted with the dive log, surface interval, compass, and weather. On the secondary menu, you can customize data for gas mixes, CCR, gauge, apnea, apnea hunt, dive plans, and tides.

Below are screenshots of a short fun dive and snorkel session in French Polynesia.

I was a little nervous that the watch face would be hard to see underwater, especially as someone who was coming from the COSMIQ+. But, I got used to the smaller watch face after a few dives and never felt like I couldn’t see the data. I know some divers love having a computer with info in big numbers on display (looking at you, Shearwater Perdixers), and if that’s you, you might not be happy with the Garmin. But if you’re fine with a minimal screen, the Descent Mk2S is a great pick.

I so badly wanted the Descent Mk2S to be an epic surf watch. But it’s not there just yet. For the surf session I’ve attached a screenshot of, I only caught five waves during that hour–not 12 like it says. If you zoom into the map you can count the lines of legit waves. I’ve come to accept that it’s a way to track where I surfed, how long I was out for, my heartrate, and paddle distance, but it’s not a way to really account an accurate number of waves surfed. I think keeping your arm too long underwater disrupts the GPS and some surfers suggest being really mindful of if you’re submerging your wrist for too long. But… if the waves are big, the last thing I’m going to be thinking about is where my wrist is. It’ll be too busy clawing through the water trying to get out of the way.

Garmin’s official surf app is only for iOS users. However, if you are an Android user, it’s still possible to convert the Garmin Descent Mk2S into a surf watch.

The standup paddling feature (5/5) is also fun to use. It tracks your distance, speed, stroke count, health data, and displays a map of where you paddled.

The Garmin Mk2S is awesome as an overall fitness watch for land based sports. It shines when it comes to tracking runs, hikes, backcountry skiing, cycling, mountain biking, and other types of expeditions. As I train by heart rate, the watch notifies me when I’m on my target pace or within my target heart rate range. The GPS tracking is accurate, so long as you start set the GPS before your run begins.

If you’ve uploaded your runs from another training platform, like Training Peaks, it will take a few runs to figure out your preferences when it comes to notification settings. But once this is dialed in, interval training becomes so much more fun when you don’t have to rely on memory or look at a phone when deciding what comes next.

The Training Peaks sync feature, however, isn’t perfect. When two runs are scheduled on the same day, the #2 run can be uploaded into Training Peaks even though you completed the #1 run.

The watch also measures fine-tune elements of your run like ground contact time, left and right foot symmetry, vertical oscillation, cadence, and stride length. While these features aren’t particularly useful for casual runners, elite runners will likely love tweaking their stride based on this information.

The PacePro feature is a major highlight, guiding your run through target pacing and prompts. You can also pre-load a route and navigate on your wrist, or search for new routes based on popular running trails in your area.

Many users also like the incident detection feature, which alerts your emergency contacts to your location if an accident is detected. If I’m venturing far from my car, I tend to run with my phone anyways, so I haven’t put this feature to the test just yet.

I’ve also used the watch to guide yoga and cardio sessions. While I did use the guided yoga feature once on the Fenix, it was slightly gimmicky with a beeping countdown alarm alerting you of the next pose. Constantly checking your wrist doesn’t exactly bode well with moving meditation, so I likely won’t be using it for this feature again. However, the guided cardio workouts are less lame, especially when you’re stuck inside doing home workouts or want to squeeze something in between other adventures.

The Garmin Mk2S has the capability to track sleep (rating: 2/5), and in theory monitors your deep, light, REM, and awake phases of sleep. However, this hasn’t been dialed in yet–there are times where the watch assumes I’m asleep, when I’m really reading or watching a movie. There is also a menstrual cycle tracking feature (5/5) which is actually very helpful if you want to know associated symptoms with your cycle and when it’s next due.

Data from the Descent Mk2S is uploaded to the Garmin Connect app, an all-in-one app that displays any relevant fitness and health data like:

You can add and subtract data fields as you see fit. You can click on a calendar day to see your day at a glance.

Compatibility with other apps

One of my favorite things about the Garmin Descent Mk2S is its compatibility with other apps. It easily syncs with apps like Training Peaks and Strava. Because I plan all my runs on Training Peaks, I love being able to complete the workout at the touch of a button and follow the prompts. This is a major upgrade from having to memorize workouts, or constantly look at my phone on the run. But, I haven’t found a way to to upload my dive data onto other apps. This makes me nervous for when or if I want to merge over someday.

Verdict of the Garmin Descent Mk2S: Is it worth it?

The Garmin Descent Mk2S is one of the few dive watches that can function as an everyday fitness watch with such capacity. I’ve worn it nearly every day for six months with little issue.

This is one of the best dive computers for women who want something that’s powerful, but doesn’t have the aesthetic of a clunky, outdated dive watch. It’s land sport features are top-tier, and the gamut of other sports capabilities make it one of the best all-around sports watches on the market.

Buy the Garmin Descent Mk2S on Amazon or Scuba.com

FAQs about the Garmin Descent Mk2S

Is the Garmin Descent Mk2S worth the money?

If you plan to use many of its gamut of features, the Garmin Descent Mk2S is worth the money. But, if you only want a simple dive watch without the added features, and only plan to wear it while diving, there are more affordable options. It could be worth weighing whether it’s worth buying a dive watch and a fitness tracker–or, if the Garmin Descent Mk2S is cheaper as an all-in-one.

The Garmin Descent Mk2S is not touch screen. Water can heavily impact the use of touch screen dive and sports watches, hence the 5-buttons.