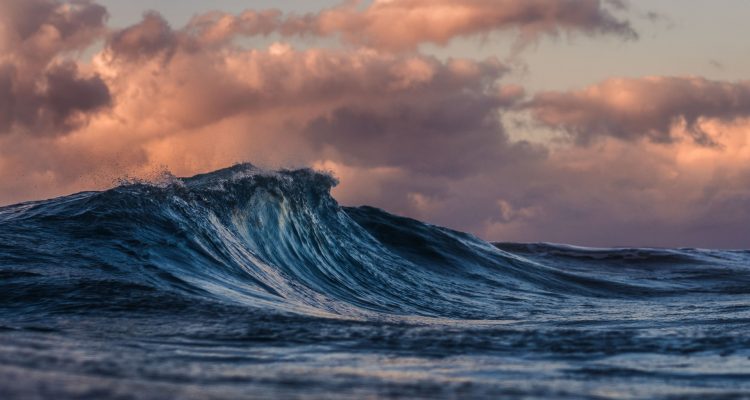 Is it Possible to Surf a Tsunami?

We blame Hollywood for giving us ideas of surfing apocalyptical-sized tsunamis and tidal waves. In this article, we take a deep dive to look at whether or not it’s possible to surf a tsunami, if anyone has ever tried surfing a tsunami before, and what it would take to find a tsunami wave you can surf.

Everything You Need to Know About Surfing a Tsunami

Can you surf a tsunami?

It’s not possible to surf a tsunami because the wave does not have a face to ride. The wave of a tsunami does not have a peak or a crest and does not break. Tsunamis move incredibly fast and resemble a large wall of whitewash, rather than a breaking wave you’d see at a surf spot.

Surfers cannot duck dive a tsunami because there is nothing to duck under. The entire wall of water is moving, rather than a wave on the ocean’s surface. Even if you managed to get to the bottom of the water column, the water behind the front of the tsunami is still incoming.

A tsunami is formed when movement from the ocean floor, like an earthquake, displaces a column of water. The vibrations create waves that can travel faster than 800 km (500 mi) per hour in deep water. When the waves reach the coastline, friction from the ocean floor lowers the tsunami’s speed, but increases its height. When a tsunami arrives, the tide recedes and the tsunami arrives as a rush of water. Oftentimes, there are surges of water following the initial wave, known as a tsunami wave train.

If you did try to surf a tsunami, there’s a strong chance you would not survive. Because the water from the tsunami does not recede quickly like a surface wave does, you would likely be carried from the water to land, where the tsunami picks up debris.

Has anyone ever tried to surf a tsunami?

There are a few surfers who have been out in the water when a tsunami hit. Big wave surfers chase waves created by storms all around the world, but they do not surf tsunamis. Some surfers also try to go out and catch waves once they hear of tsunamis elsewhere in the world, but this doesn’t mean they’re surfing the tsunami itself.

Most stories about people who have tried to surf a tsunami tend to be rumors, though there have apparently been a few surfers who survived being out in the water during a tsunami. News reporters often film surfers paddling out in California just after a tsunami happened elsewhere in the world, claiming that the surfers are surfing tsunami waves. This is a bit disingenuous as the surfers aren’t actually surfing the tsunami itself.

A viral video of a cut-and-pasted Powerade commercial of a wave at Mavericks also often makes the rounds as reality. There are a handful of other videos that claim to be ‘tsunami surfing’ but alas, these are always filmed at big wave spots like Nazare, Mavericks, Waimea, and Jaws.

Tom Gogola, a surfer from Devon, England was surfing an outer reef in Samoa wave when a tsunami hit. He told Wavelength Magazine that he saw a wave that, “Jacked up in height and had this real square, unsurfable look about it.” The water dropped so much, the reef they were surfing became above sea level, with sea creatures exposed on the coral. Eventually, the waters calmed and Tom was able to go back to shore.

Chris Nel, a surfer from New Zealand, also was out surfing in Samoa when the tsunami struck.

“All of a sudden the water went real weird, it kind of glassed off and got real lumpy, then we started moving real quick, getting sucked out to sea. It was pretty scary looking back and seeing the reef completely dried up. It looked like a volcanic riverbed – it was just gone,” he told The Guardian.

What about tidal waves, tidal bores, and glacier waves?

Though you can’t surf a tsunami, there are many other types of waves you can surf that go beyond your everyday surface wave like tidal bore waves, river waves, and glacial waves.

Tidal waves and tsunamis are not the same thing. Tidal waves used to be what we now call tsunamis. According to the USGS, a tidal wave is a wave formed in shallow water caused by tides formed by gravitational interactions between Earth, the Moon, and the Sun.

When parts of glaciers melt and fall into the ocean, this displaces the water and creates its own wave, allowing surfing called glacier surfing. Some surfers, like Garrett McNamara and Kealii Mamala have chased these glacier waves by staking out near glacial cliffs and waiting for ice to melt and break away, known as ice calving. McNamara’s first experience glacier surfing was in 2007, and there have been a handful of surfers who have similarly chased these frosty waves ever since.

What other questions do you have about surfing a tsunami?

How Much Money do Surfers Make? (Including the Pros)
What You Need to Know About Choosing a Custom Surfboard: Q&A with Jake Harman
How to Surf (and Wipeout) at Reef Breaks Safely
How to Make Time and Save Money for Surf Trips
Surf Even when it Scares You