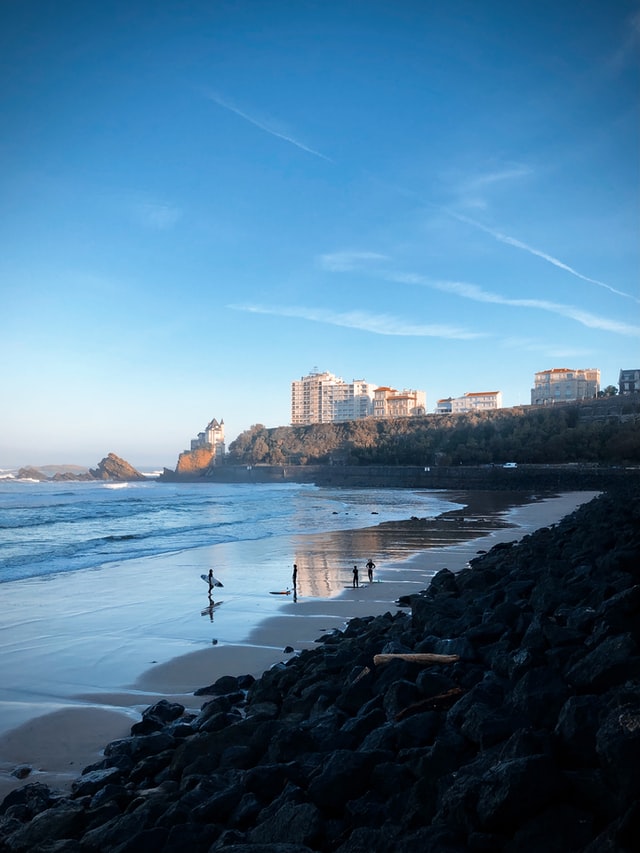 The Best Surf Camps in France

No matter if you’re just learning to surf or hoping to get barreled, France has an incredible coastline that spans from beginner-friendly to heavy hitters like La Gravière Beach. In this guide, we’ll cover the best surf camps in France and highlight exactly what makes them so extraordinary.

The Best Surf Camps in France: At a Glance

The Best Surf Camps in France: In Depth

This surf and yoga retreat hosts surf camps specifically for adults aged 23 and up, or adults aged 30 and up. Over the course of a week, surfers will receive six hours of surf lessons, and Pura Vida Lodge will provide a surfboard and wetsuit. Surf lessons are taught in the Les Landes region of France, with yoga classes also also taught daily.

Pura Vida Lodge has a large shared garden with a heated private swimming pool. They have plush sofas in their lounge room, decorated to suit that surfer style. Rooms sleep two to six guests. Overall, the Pura Vida Lodge is one of the best surf camps in France for adults, and a great place to fine tune your surf skills.

Accommodation options include rooms to suit two to five people, making it one of the best surf camps in France for families or groups of friends traveling together. Hammocks help surfers relax after a long day spent on the water. Beginners will focus primarily on learning how to surf, while intermediate and experienced surfers will be shown where to paddle out and catch some of the region’s more advanced waves.

Found in the small traditional village of Leon, learn to surf at a camp that feels welcoming and cozy. Included in a week-long stay are five surf lessons, videography and analysis, six nights of accommodation, and breakfast. Every morning, the surf coaches take a look at the conditions and transport surfers to the best spot via a 9-seater surf bus. Then, you can hit the skatepark just outside of town or fine-tune your slacklining skills back at the camp. Surfers can also use their gear to surf at breaks outside of the camp if they wish.

The surf camp is family-friendly with a range of rooms that sleep from two to four people. Each room has a private bathroom. The surf camp villa has a massive terrace and is surrounded by oak trees, making it a peaceful place to recharge after a surf.

Want to learn how to surf and speak French at the same time? At Biarritz Language Course Institute, c’est possible! This surf camp is ideal for travelers who really enjoy feeling a sense of place as they learn to surf. And, lessons are taught at one of France’s world class surf spots! During your seven-day camp, you’ll have five surf lessons, 20 French course sessions, gear rental, six nights accommodation, and meals included in your stay.

This surf camp functions a little differently to many other surf camps in France. Surfers will be living in the home of a French family, sharing meals with them and speaking French. From your home, you can venture to the beach or town center all within a 10 minute walk.

Joyu Surf Shack is a surf camp just a few minutes away from the beach on foot. Unlike many other camps in France, Joyu Surf Shack offers great value for more experienced surfers. During a one-week stay, surfers will have five days of surf guiding, gear rental (no dinged up foamies on offer here), surf transport, meals, and accommodation. One of the main highlights of this surf camp is that it’s specifically targeted for surfers who want the best waves but without the hassle of figuring out transport, parking, and knowing where to paddle in.

Rooms range from dorm-style to private double rooms, with each room having its own bathroom. Everyone has access to a living room, sun deck, and garden area. The camp is close to spots like Parlementia, Les Cavaliers, Hossegor, and the camp sometimes also ventures to Zarautz, found in Northern Spain.

Does France have good surfing?

France has great surfing no matter your ability level. Waves vary from beginner-friendly to experienced surfers only.

Where should a beginner surf in France?

The best spots for beginner surfers in France are the beach breaks found at Plovan, Penhors, Les Dunes, Hendaye, and more.

Is surfing popular in France?

Surfing is very popular in France not just for French residents but also with wider Europe. Many surfers from nearby countries venture to France to surf. According to the CBI, there are over 450,000 surfers in France alone.

What are the best surf spots in France?

The best surf spots in France include the waves found at Biarritz, Hossegor, and Landes. Experienced surfers will love looking for more of the heavier waves found in Britanny.

Have you ever been to a surf camp in France? Share your experience with us below.