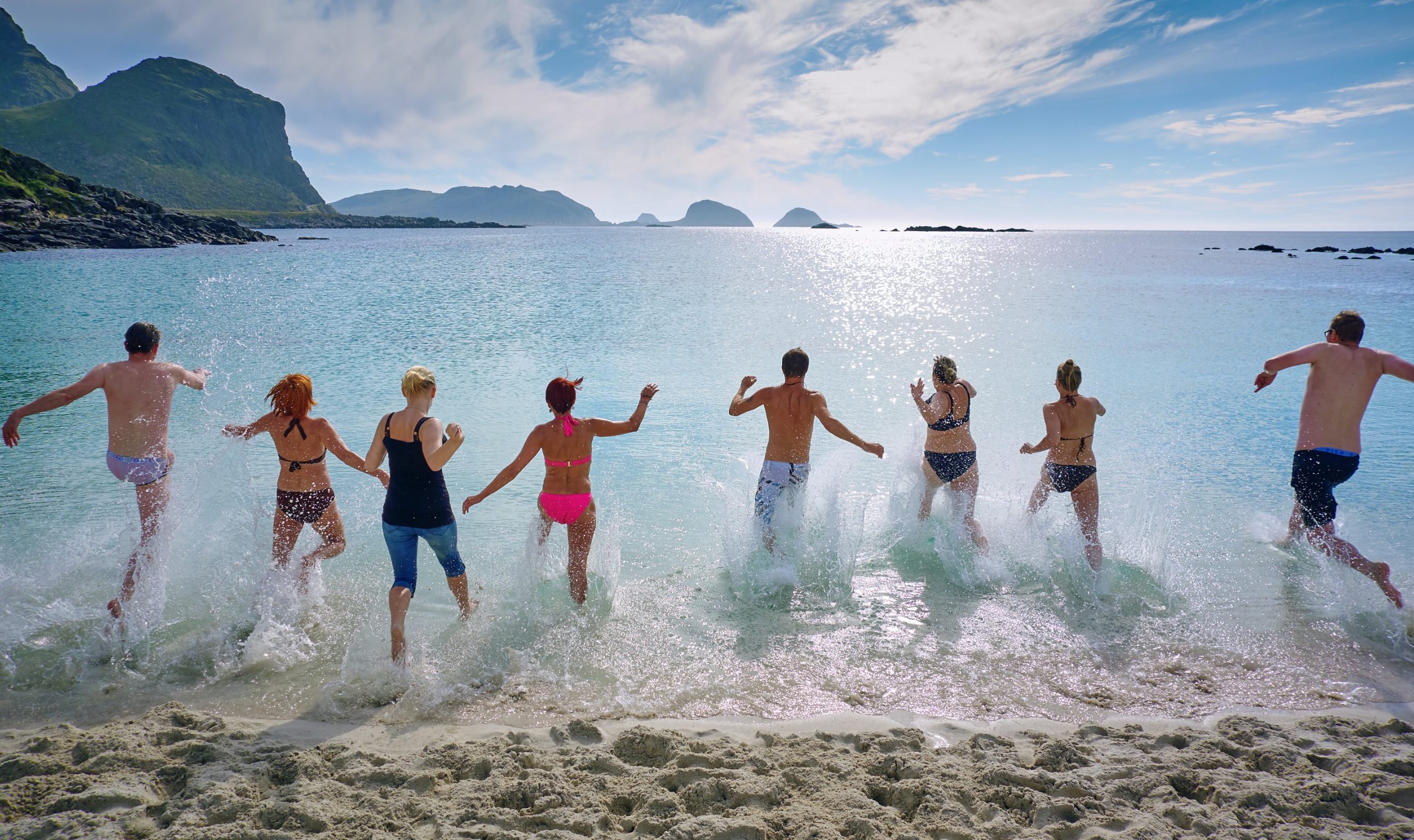 The Best Beach Games to Play This Summer

Sandy beaches can be the perfect playground for having fun with family, friends, or even strangers, and we’ve taken the time to find the best beach games to take on your next trip. Whether you love playing an active, lively game with lots of movements or a strategy game, you’ll be spoiled for choice.

The tidal ball is a game meant to be played on sand, making it a no-brainer if you are looking to have fun on the beach. The game set is super portable – only 8 ounces-and comes with 6 colored balls, a  waterproof mesh carry bag, a plastic sand scoop, as well as 4 beer koozies. 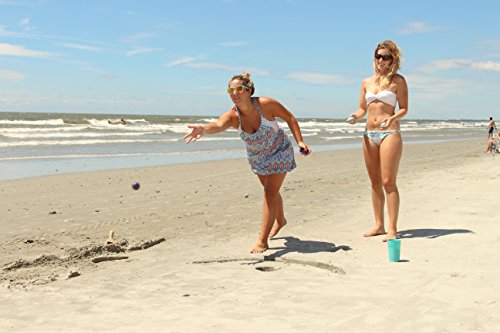 To play, find a surface with hard sand, scoop two holes 30 feet apart and a trench 1.5 to 3 feet behind each hole. Then, form two teams with two players on each side. For every round, each team will have 3 tidal balls to throw every round. After a single throw, the teams alternate throwing the ball until all 6 balls have been thrown. To win, a team has to reach 21 points first.

Here’s how points are scored:

But that’s not all, the game uses a cancel out scoring system. If your team gets 6 points and the other gets 4 points your updated score is 6-4=2 points. The tidal ball takes the best in Cornhole, Bocce, and Horseshoes and gives you a simple game to play that everyone can enjoy without much sweat. It the best game to play and enjoy a cold beer with friends. Get creative by adding in a cheeky drinking game.

Shop for Tidal Ball on Amazon

Spikeball is a very fun beach game; if you have a bunch of active friends, they’ll love it. Its kit comes with a net, five foldable frame legs, 3 balls and 5 frame sections fitted in a drawstring carry bag. You might have seen this one featured on Shark Tank. 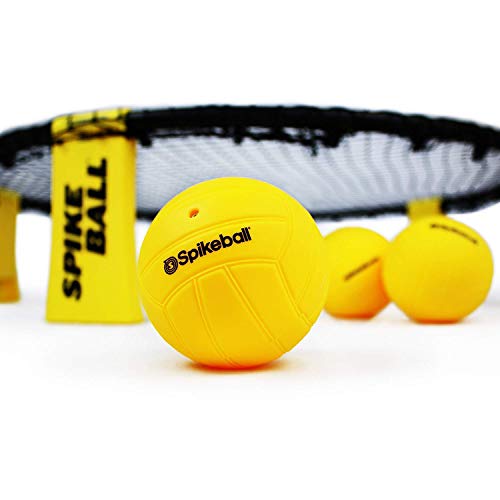 Assembling the game is very easy;

Spikeball involves 4 players in a 2 vs 2 setups, it can get played competitively or just for fun. Learning is very easy since playing involves using hands mostly (or other body parts) but you mustn’t catch the ball. The game’s rules are similar to volleyball, you hit the ball twice between you and your teammate then bounce it onto the net to the other team. If a team double bounces the ball on the net, lets it go to ground or hits the rim, the other team gets a point. The best ways to win points involves

Being a beach game, you can dive on the sand to recover the ball from power shots. If you’ve been looking for a summer workout game, this is it.

Can you really spend a summer without playing a game cornhole? This regulation sized set even has LED lights so that the game doesn’t have to stop even after the sun goes down. 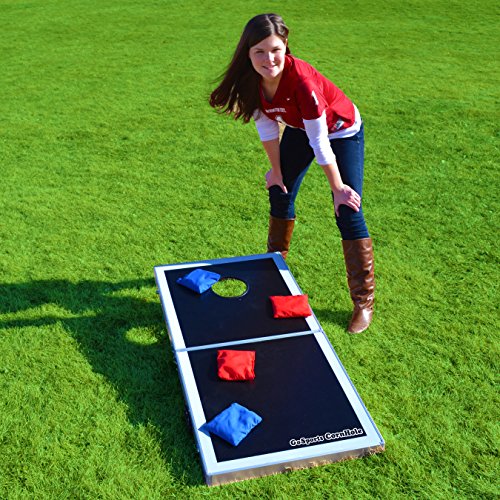 The set includes 8 soft and lightweight bean bags, 2 cornhole targets, a manual and a travel carrying case. The targets are made to collapse down into a bag after use for compact packing. They are made of aluminum and MDF to be sturdy and durable.

Playing the game is guided by cornhole game rules where your score depends on the position you throw the bean bag. If it lands on the board you get a point, if it lands on the hole you get 3 points. When playing during the night, you only have to flip a switch and the cornhole targets will light up. Pretty cool, right?

If you are looking for a portable game with no setup process, one that you can get playing as soon as you get to the beach, this classic game will be great for you. Playing it is like bowling on the beach–without the disappointment of gutter balls. 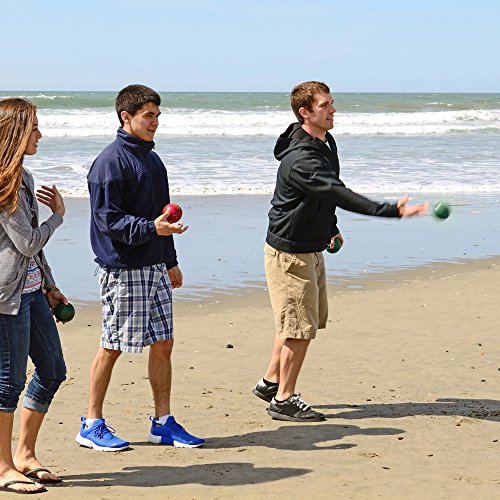 The bocce ball game has 8 balls – 4 are colored green and the other 4 are colored red – to differentiate different team’s scores. There’s an additional small ball that gets aimed at when playing, it’s called a pallino or jack ball. All the game components are packaged in a classic carrying bag for easy carrying.

To play one team throws the jack ball 15 to 20 feet away from one end of the playing court where all the participants are standing. Each team tries to throw, roll and land their balls as close as possible to the Pallino. Playing it on the beach makes it very enjoyable since it’s harder to roll the balls near the target. The turns for throwing get alternated between the two teams. If your team’s ball is the one closest to the jack, you earn a point for each ball that is closer to the jack than the nearest ball from the other team. Throwing the jack is done by the other team for a new. If your team reaches 12 points first, you’ve won the game. To add on to the fun, knocking the other team’s balls is within the rules of the game.

Jazzminton is a modern paddle beach game that’s a variation of old school beach games like paddleball, tennis, and badminton. It has been adapted for beach conditions. Jazzminton is for those who love a fast-paced game with lots of action. If you are looking to exercise and keep fit, this beach game is a top pick. 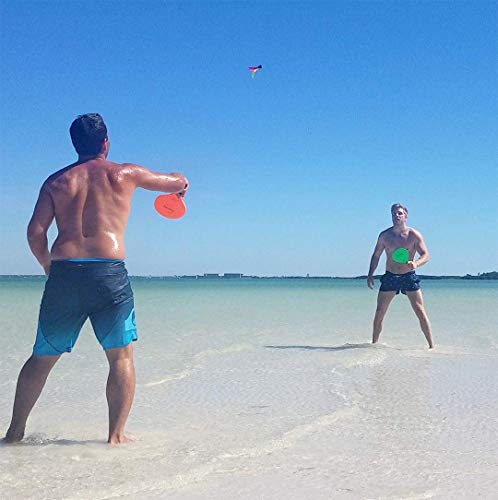 The game set components are lightweight and include 2 wooden paddles and 4 four weighted feather birdies. The birdies are made of real feathers for better movement in windy conditions and to also float on water.2 of the birdies are colored red, they are perfect for slow play while the other 2 are colored yellow are suited for fast play.

The game is very easy to play, it doesn’t have or require a net or any special skillset. All you have to do to ensure the birdies don’t hit the sand. It can be played by two people who hit the birdies up to each other while standing 5 feet to 30 feet apart. Alternatively, you can also play it alone by hitting the birdie straight up and keeping it airborne. Jazzminton is perfect for any type of weather on the beach.

Beach volleyball, who doesn’t love it? It’s the perfect game for beach parties. Everyone Can Join In. The Badens champions is a portable beach volleyball set that you can assemble and play on any beach. Whether for fun or you are planning a tournament, this set will serve you well. Unlike other beach games, it’s a game of inclusivity, and more than 4 people can participate. More people, more fun, right? 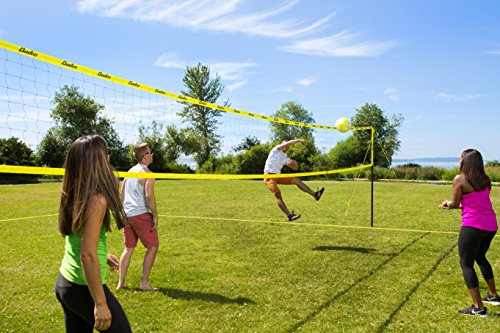 The volleyball set comes with a manual, 2 adjustable steel poles with an assembled height of  8 feet, a 32 x 3 feet net, a hand pump plus a needle, a waterproof high- quality volleyball, playing boundary line 180-ft in length as well as stakes(for securing the nets) that are 10 inches long. The items are made of polyethylene to handle harsh weather conditions and remain durable. Everything is packed in a nylon carry bag for portability.

The rules are similar to indoor volleyball:

Bucketball is like an outdoor giant pong game. That’s right, instead of cups, you get to use buckets. Kids can play, making it a family-friendly game that’s sure to bring some good times and giggles. 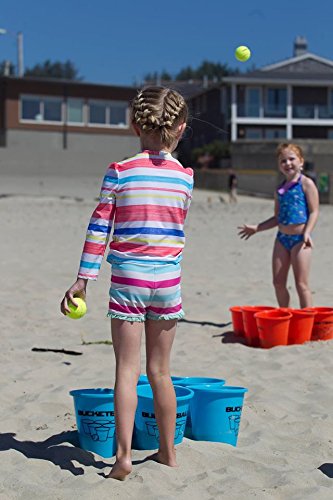 To play, just add some little water into the buckets to prevent them from getting knocked over by the wind. The playing rules are similar to pong. Two teams take shots aiming to get the ball in the bucket. If an opponent from the other team makes a shot, the bucket gets removed. If your team manages to hit all of the opponent’s buckets, you’ve won the game.

Sounds easy right? Not really, in windy beach conditions, you will find that aiming for the bucket requires some top concentration. Because of this, you’ll get to enjoy the game longer. Variations on the game can be made depending on the participants; do you want a bucket ball beer game, why not?

Have you been looking for a game that provides lots of entertainment for hours, requires few skills to play and that’s made for all ages? Kan Jam Ultimate Disc is a must-try. Its set comes with 2 goals (collapsible cans), 2 flying disks, game labels, and an instruction manual. The components are made of polypropylene for durability. 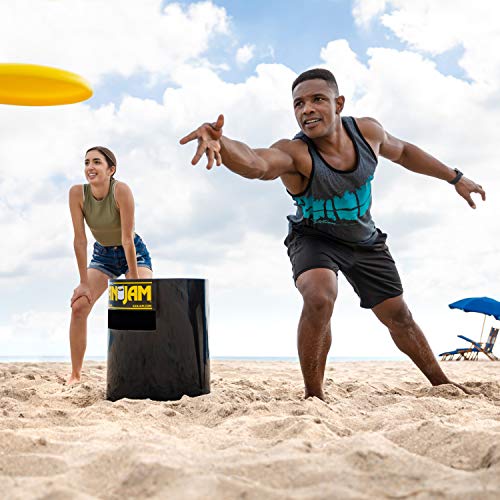 Two teams with 2 members each – a thrower and a deflector – are involved. The two cans get placed 50 feet apart opposite each other. The thrower stands behind one can and throws a disc aiming to get it in the other can. A deflector stands around the other can and helps to get the disk in or at least make it hit the can. After each team member has tossed a disc, it’s the other team’s turn.

But there’s a catch; if a throw makes your score exceed 21 points e.g. you were at 20 and your throw gets your team 3 points, they get subtracted from your 20 points. It’s one of the things that makes this game enjoyable even for spectators; watching a rival messing their winning chance kicks the fun up a notch

The BulziBucket game is a simple set up, lightweight, very portable and very easy to play. If you are not a fan of bucketball and you want something more portable and different than cornhole, get this game. What makes it even more appealing is the fact that you don’t have to add water to the collapsible buckets. Besides, they float on water meaning you can play BulziBucket even on the ocean. 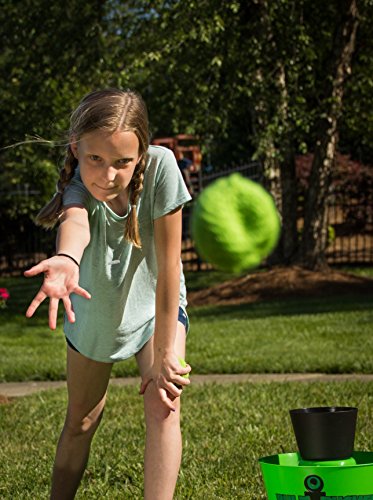 The game comes with 2 buckets targets, 6 hacky sacks–with everything compact-packed in a backpack. The items are plastic made, flexible and durable.

Start tossing the bags aiming to get them in the buckets in alternating turns. Any throwing style can get used. BulziBucket also uses a deductive scoring system where target points are set by participants. The first team to attain the points gets bragging rights.

Giant tumbling timbers is a Classic family Jenga game that has evolved from being played in backyards and has found its way to the sandy beaches. Consider it Jenga on steroids! For those who don’t want to be very active on the beach, and love a strategy game, they’ll be happy after ordering this game. It’s a game that a steady hand and concentration. Everyone from small children to adults can get involved in building the blocks and removing them. The is a game you’ll want to play again and again. 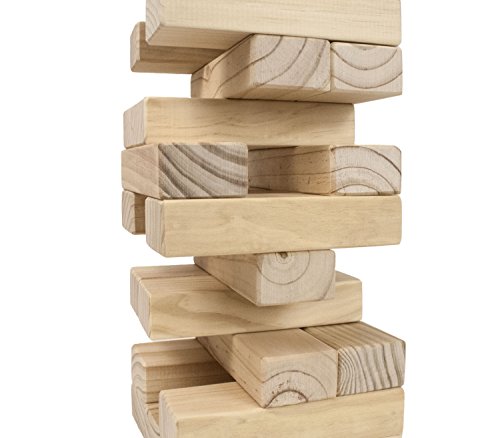 This set comes with 56 well-sanded pine timber blocks measuring 7.5 x 2.5 x 1.5 inches for the game. When fully stacked, the tower stands at 5 feet in height!

How is it played? Participants take turns removing blocks from the giant wooden tower. After removal, you place the block back atop the pile. Pulling one piece out is easy as blocks are well sanded, have perfect dimensions and are lightweight, as long as you do it right you’re good. The first person to make the tower fall loses the game. Though not portable as the other games in this review, your effort to carry the set to the beach will be rewarded with lots of fun.

Disclosure: The Salt Sirens is a participant in the Amazon Services LLC Associates Program, an affiliate advertising program designed to provide a means for sites to earn advertising fees by advertising and linking to Amazon.com.